Nolu’s is a cosy restaurant with great ambiance located in Al Raha. They brand themselves as “healthy Californian cuisine with an Afghani twist”. I’ve frequented Nolu’s a few times over my last few years in Abu Dhabi, and am never disappointed. It’s a great place to take visitors to, and their menu ranges from traditional breakfast to Afghan specialties, plus an appetizing selection of sandwiches, wraps and more, with a beautiful daytime view of the water.

Their Afghan-Californian fusion menu makes it a one of a kind find in the capital. I have tried their Afghan selection a few times. I can never have enough of the Aghan ‘chutney’ on the table, with bread. I’ve tried three of their Afghan starters and I really can’t decide which is my favorite. I really like the Borani Bainjon (eggplant) and Mantoo dumplings (beef dumplings), both of which have a flavorful yogurt base and will melt in your mouth. Yesterday, I tried the Afghani meatballs, covered in a mouthwatering tomato-based gravy with a burst of other flavors and was equally as good as the other Bainjon and Mantoo. From the mains, I’ve had the Angus Beef Kabob and the Koobideh Lamb. I liked the Koobideh lamb and enjoyed the flavors, my taste buds lean more towards the Angus Beef Kabob, which was was satisfying and perfectly cooked. My friend ordered a build-your-own salad, which also had a sufficiently large portion and was thoroughly enjoyed. Their mains are large portions, so unless you’re starving, be prepared to take some home.

Servers were helpful and very friendly, however forgot to bring the juices we ordered, and can sometimes take longer to get back to your table, especially during busy hours. Nolu’s attracts families, couples and work groups alike. Their freshly squeezed juices go very well with the food.

Nolu’s is one of my favorite spots in Abu Dhabi and I have been very satisfied with anything I’ve ever ordered off their menu. The best part is I never walk out leaving too bloated or unhealthy. 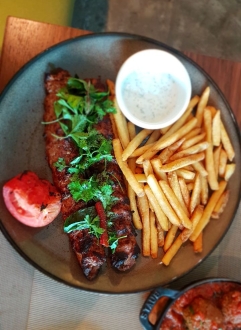